Aneurysmal alteration of the residual aortic wall is a serious complication of aortic root surgery. Since the development of surgical techniques such as B. various coronary artery reconstruction procedures (Carrel patch, Cabrol and Piehler procedures), complications at the coronary artery reconstruction site have decreased [1]. However, coronary button aneurysm formation has been reported in patients undergoing coronary artery repair using the carrel patch technique, particularly in patients with Marfan syndrome (MFS). Some remaining aortic walls are considered aneurysms because of their connective tissue abnormalities, such as medial cystic necrosis [2,3]. Here we report a case of a rapidly growing giant coronary button aneurysm in a patient with MFS. We have successfully treated it despite the presence of firm adhesions due to repeated surgeries.

A 32-year-old man with MFS underwent a valve-sparing aortic root replacement (Yacoub procedure) for annuloaortic ectasia in the United States. At the age of 45, a chronic DeBakey Type II aortic dissection was diagnosed and he underwent a partial arch replacement at our institution. The patient was prescribed losartan to prevent the formation of aneurysms. However, he stopped going to the ambulance at the age of 49 and has not taken losartan since. Already at that time bilateral coronary button aneurysms were pointed out. The left coronary button aneurysm was oval with a diameter of 25 mm, while the right aneurysm was 15 mm in size with no change in size from CT four years ago, and both showed no tendency to enlarge. Three years later, the patient presented to the emergency department with complaints of chest pain. Computed tomography showed that the left coronary button aneurysm had grown to a diameter of 73 mm (Fig 1) and that there was no stenosis in the coronary artery. Since blood tests or an electrocardiogram showed no signs of myocardial ischemia, the enlarged aneurysm was considered to be the cause of the chest pain. In addition, echocardiography showed moderate aortic regurgitation due to dilatation of the aortic ring. We believed that the aortic regurgitation would be difficult to repair and that it would get worse in the future if left untreated. We planned left coronary artery reconstruction and aortic valve replacement.

After performing the third median sternotomy, a cardiopulmonary bypass (CPB) was performed with an arterial cannula in the right femoral artery and a venous drainage cannula in the right femoral vein. Under mild hypothermia (28°C), the ascending aortic graft was clamped and cold crystalloid cardioplegia was administered. External identification of coronary aneurysms was difficult due to the tight adhesions around the graft. Therefore, we decided to approach the aneurysm from the ascending aortic prosthesis. The anterior surface of the graft was incised to identify the coronary button anastomosis. The anastomosis site of the coronary button, ie the neck of the aneurysm, was approximately 25 mm in diameter. It was incised transversely and enlarged, and a thrombus in the aneurysm was removed to identify the left main trunk (LMT) ostium. Four mattress sutures were placed at the edge of the LMT using 4-0 Prolene with a felt pad and a distal anastomosis was performed with an 8mm Dacron graft. The proximal side of the graft was anastomosed to the buttonhole of the aortic graft with 4-0 Prolene running suture, stretching the graft forward sufficiently to avoid kinking of the graft. The aortic valve replacement was then performed with a mechanical valve. The right coronary knob did not tend to enlarge but formed an aneurysm. To reduce the possibility of future enlargement, it was sutured using a 4-0 Prolene mattress suture with felt pads. Weaning from CPB was uneventful. Postoperative recovery was uneventful. Postoperative contrast-enhanced computed tomography (CT) showed no kinks in the graft and no other significant problems (Fig 2). The patient was discharged on the 19th postoperative day. 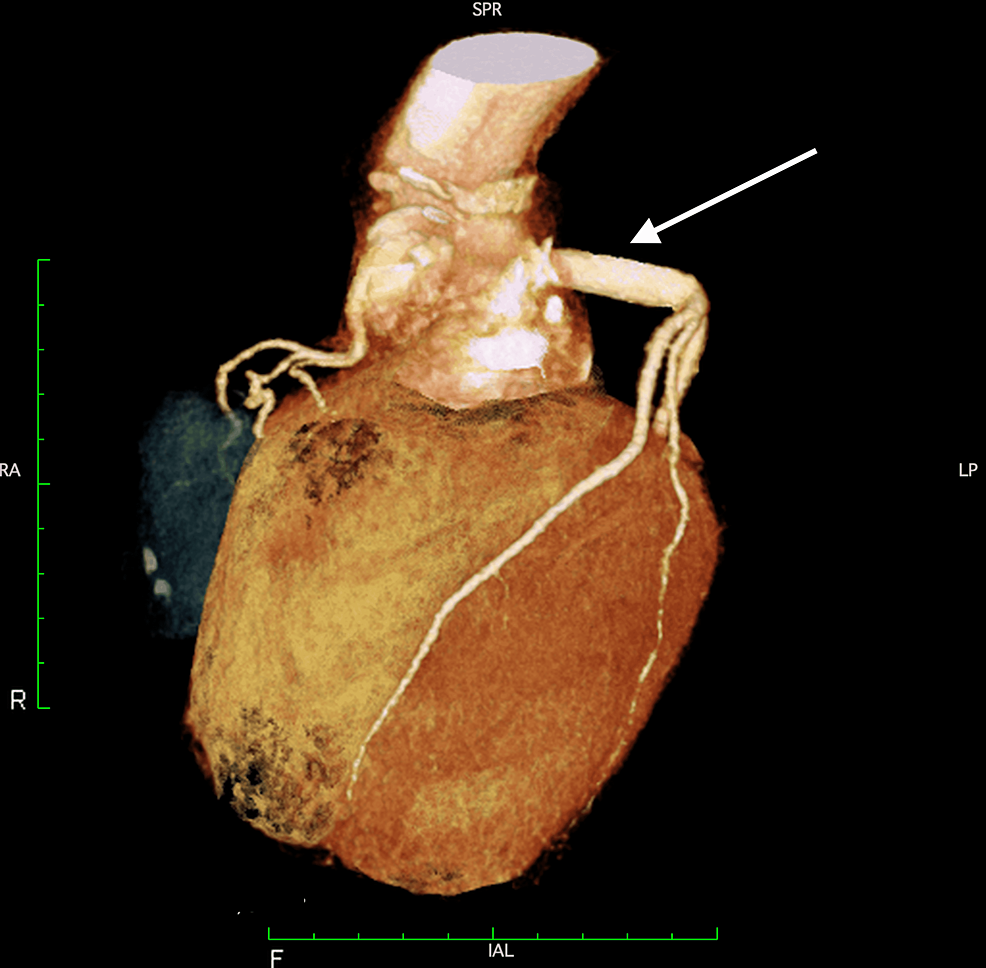 The coronary artery was reconstructed with the artificial graft (arrow) without complications of the anastomosis site.

1. It does not require excessive loosening of adhesions and avoids intraoperative injuries.

2. It allows reconstruction with the original direction of blood flow.

3. It can be applied to large coronary aneurysms since mobilization of the coronary ostium is not required.

We believe this is a very useful method; However, the length of the graft must be chosen carefully to avoid bending.

It may also be important to prevent aneurysms from forming while using losartan. Aneurysm in a patient with MFS is reported to be associated with increased transforming growth factor-β signaling and can be prevented by an angiotensin II type 1 receptor blocker, losartan [7,8]. The effect of ARBs on aortic root growth rate in patients with MFS showed mixed results, but losartan was able to improve event-free survival in patients with MFS at > 8 years of follow-up [9]. In the present case, the coronary button aneurysm grew rapidly from 25 to 73 mm in three years.

This increase was observed after discontinuation of losartan. Given that patients with MFS retain the abnormal aortic wall, including the coronary knob, it is advisable to continue losartan and regular CT scans even after aortic root replacement.

We can conclude that the intra-aortic approach was useful for the treatment of coronary button aneurysms with advanced adhesions. In coronary artery reconstruction, particularly in patients with MFS, it is important to allow the least length of the aortic wall and to prevent aneurysm formation by continuing angiotensin receptor blocker medication.