Noli Taylor, IGI’s senior director of programs, said the shade trailer will provide sun protection and a place to rest not only for farm workers but also for gleaners and even school groups who visit the farm.

“We’re going to use it all the time,” Ms Taylor told the Gazette.

The airy wooden slat shelter was designed and built behind Thimble Farm’s greenhouse over a period of seven days to Sunday by a team of 10 current or junior university students and a handful of instructors, led by Cambridge-based architects Keith Moskow and Robert Linn in the frame her Studio North summer workshop on the island.

IGI Regenerative Agriculture Consultant Andrew Woodruff also lent a hand, using part of the greenhouse as a metal workshop to fabricate the heavy iron brackets that hold the structure’s platform to the trailer.

A team of university students spent the week at Thimble Farm designing and building the structure. — Jeanna Shepherd

Both Mr. Woodruff and Mr. Moskow have a history with Thimble Farm that predates IGI, which bought the property in 2013. Mr. Woodruff was the last private farmer to operate the 40-acre farm before it changed hands to the nonprofit organization, while the previous owner was Mr. Moskow’s cousin Bud, who started a commercial berry farm there in the 1980s , who built greenhouses and ran the business for more than 20 years.

“He got his pilot’s license at 60 so he could fly raspberries to Boston,” Mr Moskow said of his cousin, who died in 2016.

The mobile shade structure is the latest creation from Studio North, a hands-on workshop that allows students to take a simple building project from concept to finished construction in a week. Previous Studio North projects have included a sleek chicken coop, a rolling pigsty, and a portable sauna, all built in Vermont. In 2021, Mr. Moskow brought the session to his family’s home in Chilmark to build Contem.plate, a Thoreau-inspired log cabin adorned with vintage license plates from around the world.

Mr Moskow and Mr Linn were drumming up opportunities for this year’s project when island builder John Abrams of the South Mountain Company suggested they contact IGI, Ms Taylor said.

“Of course we had a hundred ideas, but the mobile shadow structure was the perfect one,” she said.

As well as providing recreation for the field and gleaning crews, Ms Taylor said the shade shed could also be a sanctuary for visiting children who may have sensory sensitivities.

“We really want them to be comfortable,” she says.

This year’s Studio North group, which included college students, graduate students, recent graduates and workshop graduates, spent Monday getting to know each other and sketching designs on graph paper. Mr. Linn and Mr. Moskow then spent the evening developing the design using computer software to produce a simple blueprint. 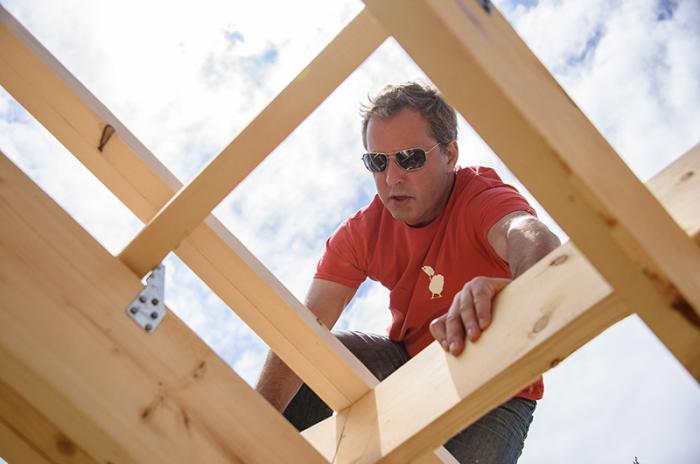 Using lumber and fasteners donated by Cottle’s and an army of tools and equipment brought or borrowed from Mr. Moskow, the team began construction on Tuesday.

It would take another day or two for the group to establish a working rhythm, Mr Moskow said, particularly because architecture and design students rarely work on an actual building.

“It’s exceptionally disorganized for the first two days,” he said.

But on Saturday, the young men and women worked and helped each other with the confidence of professionals, even climbing onto the shade shed’s cantilevered roof, power tools in hand.

“On the first, second and third day, that would never have happened,” said Mr. Moskow proudly.

It’s the roof, with its two wing-like sections, that serves as Mr. Moskow’s signature on the wood structure, said Kyle Neumann, a Studio North alumnus-turned-instructor.

“It doesn’t have to be that verbose, but that’s Keith Moskow,” said Mr. Neumann, a 2021 graduate of Syracuse University who works for a Newburyport company that is partially owned by Mr. Moskow.

Another trademark of the architect is the exposed construction, Neumann continues.

“The interior is the room of refuge,” he said. “The exterior shows how it was designed and engineered.

“Our architects, when they’re hired, go to construction sites just to understand what’s going on down there, what they’re designing for,” he said.

“We constantly emphasize safety,” he said.

In more than a decade of workshops, he said, there have been no serious injuries (although one student discovered she was pregnant).

“We get a lot of splinters, but we have the technology to get them out,” added Mr. Moskow.

Students at this year’s workshop even traveled from China and Morocco to study architecture at schools like Rensselaer Polytechnic Institute and Columbia University.

“I had the book knowledge… of buildings; I wanted street smarts,” said Jordan Jackson, a recent RPI grad from Palo Alto, California, explaining why she signed up for Studio North. With a degree in civil engineering, Ms. Jackson wants to work in green design, she said.

“A lot of sustainability … depends on how things are executed and constructed,” she said.

One thing Ms. Jackson hadn’t considered, she said, was the aesthetic aspect of the building’s design. Working with the architects has shown her the importance of balancing function and expression, she said.

Tage Colberg, a Lyme, New Hampshire Tufts grad student studying Human Factors Engineering (aka Ergonomics), also found after working with Studio North that he was reevaluating the balance between function and form.